LiEat is a series of games made by someone who goes by the name Miwashiba. To start with, this is actually a free game available online.  There are a number of places online where you are able to legally download it.  Purchasing the game on Steam is to support the creator, but not required.  If you prefer to just play a game with no knowledge about it, you can go ahead with out reading further.  If you want to know if it’s worth your time, that’s what I’m here to explain. 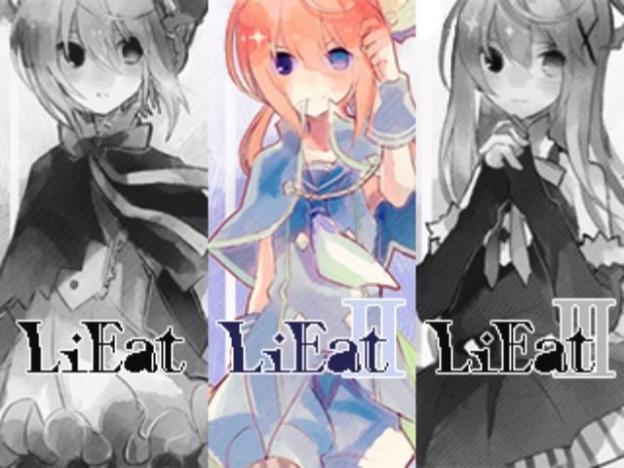 I’ll be reviewing the game with the idea of the 3 dollar price point in Steam, rather than just being a free game. I spent a couple of hours on this game and if it does interest you I recommend at least trying the free game.

There are three games in the LiEat series, all three are included in the steam purchase.  Each game is made made in Wolf RPG Editor, and while I’ve never used any RPG maker nor Wolf RPG Editor, the choice of engine might set off warning bells. To be honest, it might be warranted in this case. RPG makers tends to have lower bar to entry, which means simpler games can be made by it. It’s not that great games can’t be made with it. It’s that due to their low bar of entry, the majority of games made in the engine tend to be weak.

That’s not to be dismissive of it, but it is a specific type of game and a specific style due to limitations of the engine. But I’m not one to review the engine. If I reviewed Game Maker, I would miss out on Gunpoint and Undetale. RPG maker had the amazing To The Moon available. So lets look at Lieat itself.

Since the steam release gives you all three games (all free available elsewhere) I’ll discuss each one in order.

The first game was my introduction to the series. LiEat I starts with talks of a vampire and then wolf attacks in an opening cinematic and from there two characters come to an almost desolate village. The characters are Theo and Efina, and, boy, the game starts to have issues from the first moment.

The first thing I noticed is the title bar is in Japanese, giving you hints that the Function keys do “stuff”. I never translated it, I never tried, it seems it’s window controls (for size and such) because none of the LiEat games  allow you to set the resolution anywhere nor drag and resize the window. It’s not a great sign that there’s untranslated text in the game.

The game itself starts just as rough. The dialog of the first game is terrible, the story makes very little sense, people just accept the randomness that it’s about, and plot points are raised and dropped often. Odd in an hour-long game, they didn’t spend the effort to get a cohesive story. We find out Efina is a Dragon, who grew from a dragon egg that appeared under Theo’s bed, and she eats lies. This is all said very quickly and the game moves on from it immediately as if we’re to accept it.

No this isn’t any better in context.

I’m not sure if Miwashiba wrote this game in Japanese (as he/she/they appear to be Japanese according to an author page I found somewhere), and someone translated it and did a poor job, or if the original script was rough, but the game is rough and it’s the writing that really has all the problems.

There’s very little character building and world building and instead it just feels like a staccato story thrown at the player for them to listen to. They are told everything, almost never shown anything. Most “puzzles” in the game can be done by elimination rather than any logic, and I honestly only remember one “puzzle”. Maybe there’s more.

Almost every part of the story has you walking around to talk to a person but there are 12 buildings and 6 people at the beginning of the game, the entire game is just going into every building until you find the place the game expects you to go next. You also should play in one sitting as the game never reminds you where to go next when you restart the game.

The art style is similar to anime, but .. honestly I couldn’t tell a guy from a girl because the resolution is pretty low and the art only takes up the smallest portion of the screen. Even when there’s a large picture, it’s not that interesting. They didn’t take a massive amount of time to make a good looking game. I’m not sure if the larger images are necessary. 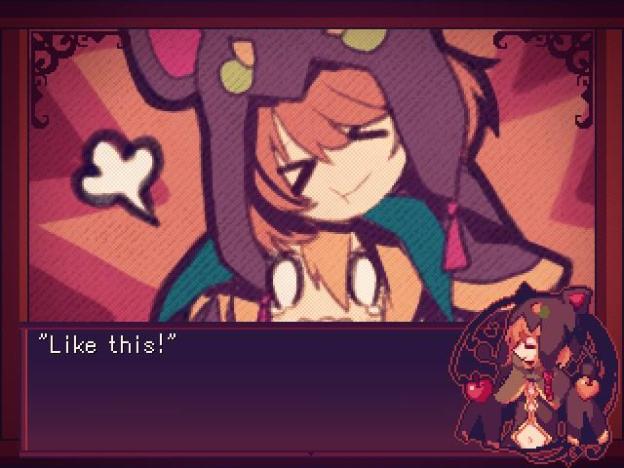 Again in Context this doesn’t make a ton of sense. And it’s a still image

I found myself constantly going, “ok so that’s in the game.” When you are to find “Levin” and do and see they are a cat person and no one mentions it? “Ok so that’s in the game”. The character then talks about how Efina is a dragon who eats lies and just appears. “Ok that’s in the game also.” When a character talks about her father and goes “One time he strangled me.” “Ok that’s in the…. ” Wait hold up he does what? And then the other character says “If you don’t like something you should say no”….. No! Nope nope nope nope. Unfortunately the game didn’t listen to me and goes on. And yes, everyone treats stuff like that as normal. It’s exposition that no one listens to.

Later the story talks about an alley. It’s interesting but it becomes a hidden path that is the next location to go to because it’s so hard to find. This was at least the fourth time I searched the town, and I had to look online to find it and apparently it’s a popular “puzzle”. Except it’s not intended to be hidden. It’s a shame because as bad as the writing was this was the one part of the game that actually confused me.

Now there’s more to the story, but really the first game is rough. But it does a couple of things. The bad guys are hidden, there’s a story and while the writing is terrible the story is interesting if it was delivered better.

As for the gameplay. Like I said, this is RPG maker, but I find it odd that it feels like LiEat was never intended to be a RPG, but rather a story-driven narrative. The combat in the game is… well there’s standard RPG combat, and this game has it, but at the same time, you fight the same enemy whenever there’s combat, there’s not a lot of changes here. But I feel like if you remove the combat from the game, you might question its worthiness as a game, but at the same time, the experience would improve, well… maybe. 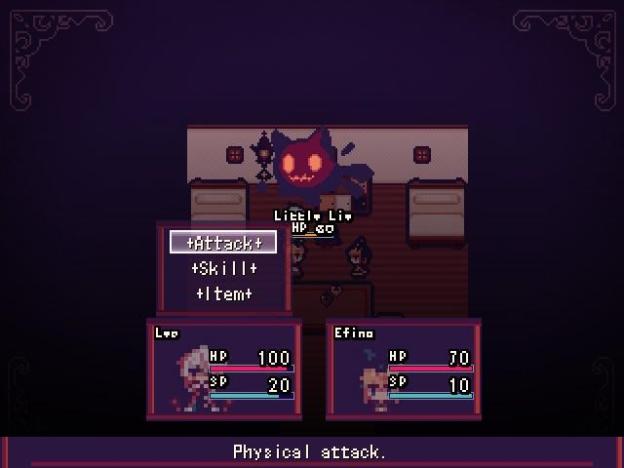 Good enemy design, but generic combat. Also this is the enemy you’ll see the most.

I’m not a big fan of fighting the same three enemies over and over, and I grinded a bit admittedly because I could and because there was no difficulty in the combat, so it was easy to grind up to level 15 or 20.

So at the end of the first game, I was a little-depressed knowing I had two more of these games to push through. They were only about an hour long but I had to use a walkthrough to find the path and I wasn’t sure what the second game would bring.

I’m glad I was reviewing the  LiEat trilogy because I pushed on and found two rather good games.

The second game is a huge improvement. The game has a similarly large area but it’s more diverse than houses and there’s more characters, and more interesting ones. There’s still some of the hokey stories from the original but you should either have accepted the dragons who appear under people’s beds or stopped playing. There’s really not a way to finish the first game without accepting that element, just due to how strange it is.

Unfortunately, the second game starts with a story about a sheep who eats people’s dreams. There’s a sheep/dragon character in the game, he is the final boss. There’s no surprise in this reveal especially with how the opening is, however the story itself up to that fight is solid. In fact, I wasn’t sure about the whole story until about 60-70 percent of the way through the game and I liked that.

LiEat II still has the same flawed gameplay as the original (fighting lies) but at the same time the experience to get to the end with the story and the twists and turns, and the fact the game pretty clearly lays out what it expects you to do next in most of the situations does make for a rather enjoyable experience.

I am kind of shocked at this as I had made up my mind about the series, and I rarely completely change my mind, but in this case, I did. I liked the second game enough that while I still don’t like the first, I could feel myself finding some value in this game.

I think the third game has the most interesting story, but also the biggest diversion. The majority of the third game is filled with a single puzzle where four maids are feuding over who made advances to the lord of the manor when they had agreed none of them would. You have access to four doors and you constantly search those four rooms.

My real problem here is you have to repeatedly search those rooms. I thought I did a thorough search, and then when I went back I found more pieces, and then went back and found more. I believe the game doesn’t allow you to do a full search of the rooms until after each piece is shown to the maids. It’s annoyingly repetitive.

However the story is better, the delivery of the story is well done, and I have to be honest, I liked it even with the bad puzzle. The third game is probably the best out of the series because we finally get some crucial character development and on a piece that was nagging me through the first two games. The development is through the story rather than just random statements about the characters.

So how do I judge the trilogy of games? Well if you’re interested, three dollars isn’t a bad price. I spent more than 3 hours playing the games, and while the first game was rough, the second two made up for it. None of these games are masterpieces and they clearly all came from RPG maker style engines, but they are enjoyable.

On the other hand, if you are still on the fence, there are free versions of the games available, and you can download them and play them without risking any money. The choice is up to you. This is definitely an acquired taste game, but it is also at a cheap price point and I enjoyed it enough that it was worth the low entry fee, even if it wasn’t always perfect.

Final Thoughts: While rough around the edges and with a weird story, two out of three games in the LiEat series were rather solid. It’s a shame the first one is the weakest because I think it will turn people off.