Played on Windows.
Also Available on macOS and Linux

7 Billion Humans is the latest from Tomorrow Corporation, who have developed Human Resource Machine and World of Goo previous to this. Both of those games are unique and interesting concepts, so does 7 Billion Humans live up to that legacy? Let’s take a look.

7 Billion Humans starts by informing the player that robots have taken all their jobs, and it’s the age of the singularity, and we have benevolent robot overlords who make everyone’s lives easier and let them do what they want. But humans want “jobs” and as such the robots, including a really obvious but humorous political caricature, gives all the human jobs.

So all 7 billion humans are told to show up for their jobs at a monolithic office building. This is just a simplistic storyline for why humans are following orders from the player and their robot overlords but it works and is a bit humorous. In fact, the game does have a good sense of humor, and there are a number of scenes that made me laugh.

The core of the game, however, is instructing humans how to solve simplistic tasks such as lining up data cubes, writing new data cubes, using printers and shredders and more. The player is limited in how they can instruct the humans, and the game slowly gives the player more and more instructions with which to write their scripts.

So yes, this is a programming game, and a sequel to Human Resource Machine, but unlike Zachtronics games and others where you are writing programs, 7 Billion Humans tackles programming in a different way. The interface is similar to Scratch programming, a drag and drop language where programmers don’t have to really understand the program themselves, they instead just order the instructions and the correct code is generated behind the scenes. Here, it’s the same, if you want your humans to step to the right, pick up an object, and then drop it, you drag and drop each instruction into your program in order and the humans will follow those orders until they reach the end of the program or an “end” instruction.

The drag and drop interface makes the game a bit more user-friendly, but personally, I always feel like the enjoyment I have in them becomes tedium before the end, as there are so many steps I’m required to drag and drop into place. Sadly, 7 Billion Humans isn’t an exception here. Once I reach 20-30 commands in a program it creates that tedium, but even when it’s early in the game and I have to do four different conditional statements, I feel like I want to have the ability to copy and paste a single block of code, rather than the entire code block.

The tasks the game require you to solve are interesting at first. There are simple tasks such as picking up a block and moving it down two spaces, or lining up all the datacubes (which are representations of information). However as the game goes on, I found myself returning to old levels often to copy a solution and then return to the current level to paste that solution in. It wouldn’t solve the levels, but many of the solutions were 95 percent complete in a previous level, and only a small change is being asked for. When it happened in EXAPUNKS, I found myself to enjoy the experience because I was using a small amount of my code (Around 30 percent) that had already been optimized, and there’s a new addition to the problem that requires almost double the code to solve the additional problem. In 7 Billion Humans, I found I’m mostly reusing the majority of code because I’m being asked to do something similar with a small twist.

One of the earliest levels

The unfortunate fact though is the multithreading is limited to that. There are the ability to observe other workers, and passing objects between them, and even simple wait for communication instructions, but there’s nothing beyond that. The ability to communicate without halting execution until communication occurs doesn’t exist here and it limits the problem space that can be handled by the game.

That doesn’t mean there are not good puzzles here, it’s just that there’s a limit to the complexity of them to the point that many of the final problems have very short code, and rather simplistic multithreading. There’s also the problem of randomized code here, where a few floors require a solution that relies on randomized instructions, and honestly, I found those puzzles to be more frustrating than worthwhile.

It’s not that I hate 7 Billion Humans or the puzzles involved in it. It’s just that it doesn’t reach a depth of code where I can say I felt that rewarded with my solutions, especially near the end of the game. I don’t want to spoil some of the final tasks, and a couple of the final puzzles are very clever. However the final puzzles felt a touch too easy for my taste, and I could have gone with something a little more challenging at that point in the game. 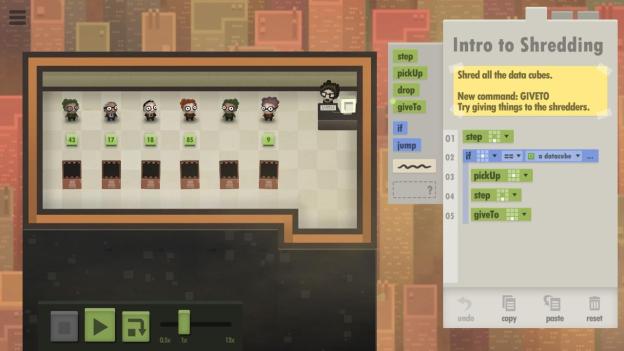 Many levels are under 20 lines of code when optimized.

Having finished the majority of the 68 levels in under 7 hours, I wonder if it was a situation where my skills as a programmer tipped the scales in my favor, and I believe that could be part of the problem, however I feel that games like 7 Billion Humans is already aimed at those of us who enjoy programming. So it’s a game that wants programmers but only will challenge the beginners in the field. A shame the game is so laser targeted at that group because it’s such an enjoyable game as you play it.

I then turned to the idea of optimization to play a little more, but ultimately I didn’t find optimizing programs here as rewarding as I expected. The game does have very reasonable lower limits, and in fact the player is able to even go below the “optimized’ goal at times, however most of these programs are rather short, and knowing there’s a 10 instruction lower limit, when your program is only 11 instructions, usually means there’s an obvious extra instruction (often I needed to remove an else statement).

Optimization is a bit easy early on, later on it’s a little harder, but nothing too difficult

At the end of the day, I finish 7 Billion Humans, and I struggle to judge it. It is a programming game, and I admit those are a niche category, but I also look at my enjoyment with it, and I realize that I have just reviewed a second programming game, EXAPUNKS, and I wonder if part of the reason I struggle to really find the same love of 7 Billion Humans, is due to playing a different game right before it. It’s definitely possible.

At the same time, I feel like EXAPUNKS and 7 Billion Humans are different games and strive for different goals. EXAPUNKS is a Junior or Senior programming course at a college, where programmers will battle over code and optimization requiring programs of significant length to accomplish goals, often times coming up with vastly different solutions. 7 Billion Humans, on the other hand, tries to be a more accessible game. It’s Computer Science 101, the entry level course to welcomes anyone. It presents the scratch style interface to bring in fans who might be scared off by EXAPUNKS cyberpunk/programmer requirements. That can be good.

Still, I feel that 7 Billion Humans had the ability to challenge the player, even if it’s in post-story levels. There was a conscious choice somewhere to limit the challenge presented in 7 Billion Humans to be more welcoming, and for me that lack of deep challenge makes me leave the game unsatisfied.

7 Billion Humans is a perfectly fine game, and if you never wrote a line of code before, it is a great entry into programming. However if you already are acquainted with programming, I am tempted to say it might be a little easy for your taste. It’s certainly fun and enjoyable, but it’s also shallow, and while new programmers will find it rewarding, anyone with any experience in the art of programming might want to consider a different source.

Ultimately, I have to give 7 Billion Humans a

It’s a good game, and I like it, but I wanted more, more levels, more time, or more depth. 7 Billion Humans isn’t ready to present anything but that simplistic entry level course to programming, and while that’s acceptable, I feel like this is an appetizer when I sat down for a full meal.

Final Thoughts: A good entry to programming, but limited to just that. It’s entertaining enough while it lasts, but anyone familiar with programming will likely beat this extremely fast, and move on. Still, it’s fun.