Played on Windows
Also Available on Nintendo Switch, PlayStation 4, and Xbox One.

Sonic Mania is easily one of the best Sonic games that have come out in recent years, as I stated in a recent review (link this). But the train didn’t stop there. In addition to the excellent game, the team that brought us Sonic Mania took it a step further and produced DLC. I guess everything can’t be retro with this game.

This is my first review of a DLC. I likely won’t review many DLCs in the future, but I was curious what could be added to Sonic Mania as DLC, and if the new characters promised could feel as natural as Sonic, Tails, and Knuckles.

Sonic Mania Encore DLC, or Sonic Mania Plus, as the game calls itself, was a chance to expand the smash hit further and add something new.

The biggest changes with Sonic Mania Encore is the addition of two new characters, though while they feel new, they are not original creations. Both Mighty the Armadillo and Ray the Flying Squirrel are from an old game “SegaSonic the Hedgehog” which was Sonic’s first foray into the arcade market. The two characters also made an appearance during Sonic Generations as well and the two characters look a little bit like Fan Characters as well, with Mighty The Armadillo looking similar to Sonic, and Ray looking like a different version of Tails. They fit in with the world, but really don’t differentiate themselves enough to stand out.

The Sonic Mania Encore DLC features a whole new mode called Encore Mode. This mode features a new set of redesigned levels and a couple of new gameplay elements. The stages remain the same with one additional zone at the beginning of the game, called Angel Island Zone. As said, the other stages have been remixed to add in new elements for both Mighty and Ray to use. 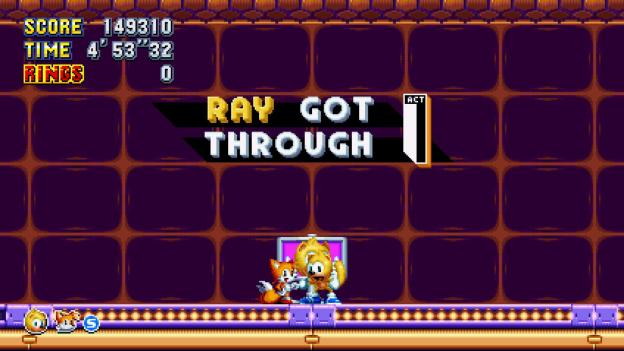 The even have their own victory animations.

The new Angel Island Zone at the beginning of the game though is a bit deceptive. It’s extremely short and lacks a boss, and really serves to allow the game to introduce Mighty and Ray. Sonic rushes through the area and opens a machine that contains the two. After jumping on top of the machine, Sonic can walk up to one of the two characters. While this seems like a major decision, it turns out to be relatively pointless.

The other character not chosen becomes Heavy Magician from the Hard Boiled Heavies, one of the bosses of the game. However, while it’s an interesting story idea, it’s just what happens in that scene. As Encore mode proceeds, Sonic and his new friend are able to round up his usual friends, Tails, Knuckles, and either Might or Ray, whichever one was not chosen. This is, in fact, a new lives system.

Each character is considered a life. If Sonic dies, he’ll be replaced by the next person in the chain, and characters are allowed to be switched out by finding the right power-ups (or shuffled by finding a different power-up). If the player runs out of characters, he will have to use a continue.

The issue is the way the story starts, it seems like choosing Mighty or Ray is a major choice, but it ends up being rendered moot after a couple of minutes. In fact, when you face Heavy Magician he appears the same as the original Sonic Mania boss. Though the game does show off a new feature, as you’ll have two characters with different abilities, you can switch between the two characters by hitting the Y button. It seems like a minor change but it really emphasizes the interesting abilities of each character pairing. 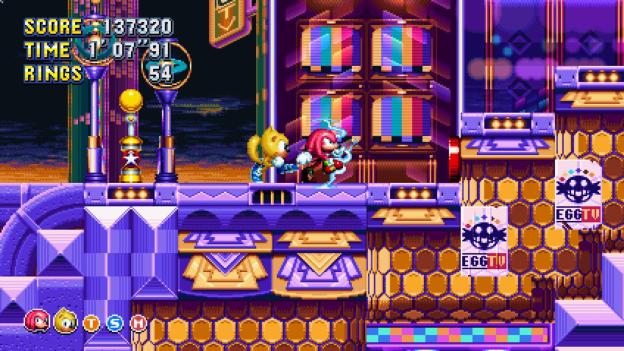 The rest of Encore mode is similar to the original Mania mode, the same zones and bosses are included, with the only real change being the level layouts.

Mighty has the ability to ground pound and survive a hit while curled into a ball, whereas Ray can fly in the air using momentum and actually produces a speedy way to get around the world, though with a lot more vertical momentum than I would imagine he could produce in real life.

From the DLC description talk about bosses being rebalanced, however, I don’t know how true that is. The bosses and the challenges they provide seem rather similar to the original game, and almost none of the bosses are that challenging, with the exception of the final boss.

The new lives system produces interesting results and new problems. You can earn lives by finding screens showing a rotating list of any character not in your group already, however these are rare. I believe on most levels I didn’t see any, and when I did find one, it was the only one for that entire zone. 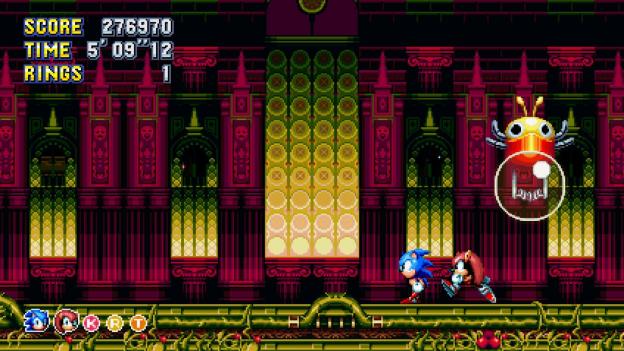 Here I have all five characters, ready for use.

The better way to gain characters is to use the bonus level. The bonus level in Encore mode is available at the checkpoints like the original game, though, instead of 25 rings, the new mode requires 50. 50 rings are rather hard to collect when any damage will drop all your rings and usually result in you only being able to collect less than 20. Though if you do collect enough rings, you’ll be transported away to the new bonus level.

Instead of the Blue Sphere game, you now are presented with a pinball table. Sadly, not a Spinball table but just a normal style pinball table, with three different levels. The game starts with the first level, and if you hit the top of the screen you get a claw game where you can grab one bonus item, including characters you don’t own, shields, or rings. After two grabs, the table opens up the second slightly harder section of the table, and after one grab there, the third section of the table opens.

The downside of the pinball table is that grabbing characters can be a bit easy, and there’s really not a strong purpose to the bonus level after you’ve earned all the characters for your team. Every 10,000 points will earn you a continue, but I had over 12 of them by the end of the game, and even stopped entering the bonus levels unless I was missing one character. The shields and coins are a nice idea, but utterly pointless after you grab the first shield you want.

I’m just not a fan of this drab pinball game.

On the other side of the bonus levels, The UFO mini-game has returned but are vastly harder than the original game. In Encore Mode I can’t even earn a single Chaos Emerald, where I was able to earn at least three from the original game.

Encore mode is an interesting new take on Sonic Mania, however, it lacks a few things that I feel the DLC should have included. A new zone would have been thrilling, and the entire Encore mode feels slightly different than the base game, but for the most part, you’re playing through remixed Sonic Mania with similar rules, I rarely died in the original game and I was able to do similar on this mode. 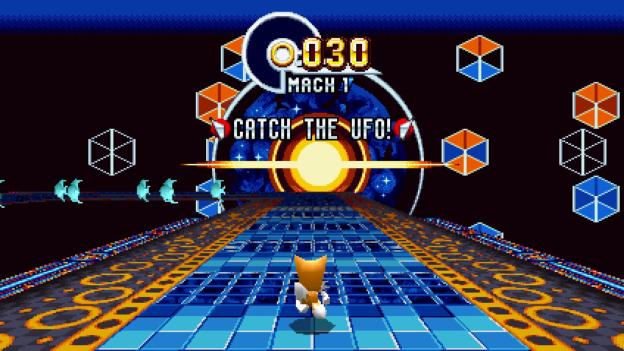 This Ufo Chase mini game’s first stage is quite hard to beat.

I think Encore mode is strange, as it can range from as easy as the original game to far more difficult, depending on which character you have and how many characters you have in reserve.

The two new characters though are an interesting and great addition, they both have their use and mesh well with the base game. Overall, I like Encore DLC, though I want more from it. However, it’s only five dollars, and for a pair of characters, and new versions of every level, it’s a good deal, and any fan of the original game should have fun here. It’s just that I have a desire to have a little more from it, and ultimately it leaves me wanting more.

I give Sonic Mania Encore DLC a

It’s a good reason to replay Sonic Mania and get new levels layouts. However, it doesn’t feel necessary to the base game.

Final Thoughts: A good upgrade to Sonic Mania, but nowhere near as essential as the original game. Support the studio, enjoy the new characters, but also realize how outstanding the original game was.