The following a script for a Youtube video.  You can watch the video below, or read the script as you see fit.

Guacamelee is back, and with the original game being a Metroidvania with its own flair and style, a sequel is quite welcome. The original Guacamelee game focused on Mexican culture, with a heavy focus on Luchador wrestlers, Day of the Dead and similar celebrations. The sequel not only continues these traditions but improves on them.

Now before we continue, yes it’s a Youtube video so by law I must say multiple times that if you enjoy this consider hitting that subscribe button. I do no ads, no sponsorships, no review copies, all I ask is for a subscribe and maybe ring that bell. With that said, let’s move on.

The original Guacamelee was more than just a flashy game, while it heavily focused on the Luchador wrestling style, it also developed a great combat system, and a fantastic map to explore. Guacamelee felt unique so it made people want a sequel that was bigger and better. 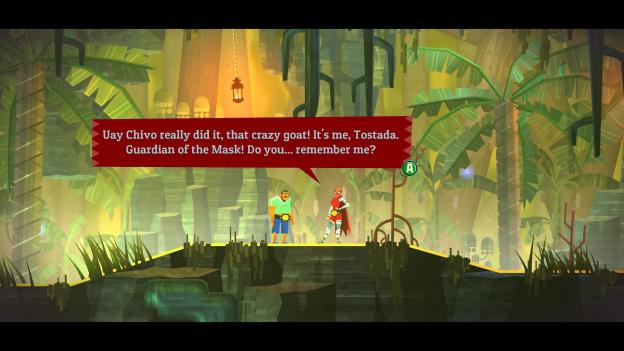 Guacamelee 2 looks amazing, the same as the original title, but if anything the style has now been cemented and improved upon. Where the original game was a pretty straight forward exploration game of world or a series of environments, the sequel takes many of the same environments but adds the idea of a multiverse. While this isn’t heavily used in the game, this gives Guacamelee 2 the ability to do far more with the design of the game and it certainly explores the idea at times.

The graphics of Guacamelee 2 fit well again with the style though, and it is always interesting to see the next ability or area the game was going to use, even while some of the locations in the game feel like they were pulled from the original, everything felt fresh and new and that’s what makes it an enjoyable experience.

Guacamelee 2 starts just before the final boss of the first game. The same fight occurs, with a significantly easier fight, and the “best ending” of the original Guacamelee is shown and continues. Our Hero, Juan Aguacate, is reunited with his love, the amazingly named El Presidente’s daughter, named Lupita at times, they get married, and have two kids. Juan has grown old and happy with his family, and everything is great, as his wife asks him to go pick up some avocados.

As he goes through the motions of a typical fetch quest though, everything changes. Black boxes appear and take over the world, and our wise sage from the first game known as “Uay Chivo” appears and warns us that the “Mexiverse” is in trouble, pulling us into the darkest timeline with a couple of quick stops. In this darkest timeline, Juan fell while fighting Calaca, and another Luchador, Salvador saved the day.

Guacamelee 2 has a less serious story than the original game. While both games have humor, the humor in Guacamelee 2 is better executed. There is a serious core of the story that gets subverted with the humor, but Guacamelee 2 doesn’t just spend the whole game being silly. Instead, it executes a joke, then rebuilds that serious core to the narrative and then makes another joke. The pacing of the humor only makes the jokes work better, and I found myself laughing quite often at just the utter silliness that happens, whether it be this Bad Dudes reference, a Street Fighter 2 reference, or a send-up of mobile games.

The humor here though is so well executed that it should be studied by developers who want to make “humorous games”. If everything is funny or “lolRandom” like another game I’m playing, then players will expect it. If the pacing is too slow it feels out of place. Guacamelee 2 seems to hit on the right timing which made the jokes funnier, without completely damaging the serious story beneath it.

The story as a whole has a few issues. As mentioned before, in the Darkest Timeline Juan died to Calaca probably during the final battle, and instead a savior named Salvador saved the day. He didn’t play a major role in the original Guacamelee if he even appeared in that game, but this time around he’s our archnemesis. While he has a small amount of development, Guacamelee 2 kept making references that felt as if players of the first game should remember this character. If that is true, then the references failed, however, I feel this was a new character that could have used a little more development or a different storyline to make them feel more important to the story.

Another issue is that if the idea of dimensional travel sounds interesting, you may be disappointed. Players are still able to travel between the Lands of the Living and the Lands of the Dead like the original game, but for 90 percent of the story, the player will explore the “Darkest Timeline” by itself. While that 10 percent does exist, most of the time, it’s short gags or jokes. There’s almost no exploration of the multiverse except for short moments for the humor of the world, rather than any necessary part of the narrative, and that exploration would be great, perhaps we’ll see it in Guacamelee 3.

This brings us more towards the gameplay and this is the one area that Guacamelee is lacking a bit. So much of Guacamelee 2 feels amazing, but most of the skills Juan learns comes from the original game. 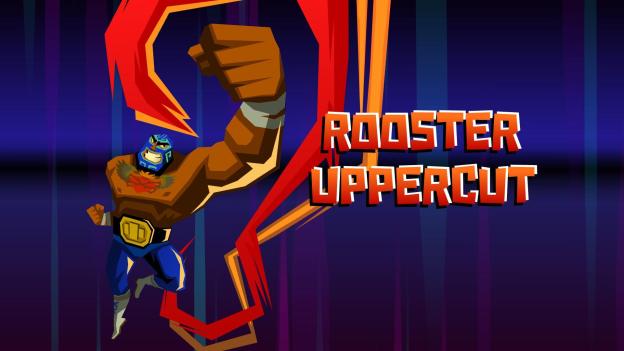 Having an uppercut, a dash punch, a headbutt, and slam are all great abilities, but each of these abilities was in the original Guacamelee. There are several other abilities available in the game, but the only new ability for Juan is the Eagle fly, which is an extremely useful and unique ability. It does provide a large amount of movement and challenges for the player to master as the game goes on.

At the same time, the Pollo Change returns as Juan can once again become a chicken, and if there was a flaw in the first game’s combat, it was the lack of use of the chicken form, or Chicken Juan. Guacamelee 2 has improved the experience and fleshed out the chicken form with a better combat system. Chicken Juan now can fight enemies almost as well as the human version of Juan.

Guacamelee 2 has several chicken-only areas of the game but adds in the ability to get special attacks exclusive to Chicken Juan. These include “Pollo Power” which allows an angled attack and a Pollo Slide. Chicken Juan gets a diverse list of powers and an interesting combat system that works well for him.

While the new moveset for Chicken Juan feels great, the human side of Juan is sadly lacking in a fresh feeling to the combat and while the original game’s combat is amazing, there’s a desire for something new.

There is a new skill system, where the first Guacamelee had players buying abilities and outfits from save points. In Guacamelee 2, the new system is skill trainers offer new skills for a price of gold, able to be earned from killing enemies, and many skills have minor goals such as using a specific ability a certain number of times or reaching a certain combo number.

At first, some of these targets feel challenging or expensive but by the end of the game, they can all be purchased as long as players do some level of exploration and collect as many chests as they can. Even the harder challenges become easier as you upgrade different skills and the upgrade system works well, but there’s only a limited number of new moves, and again many of these are in the original game, such as the suplex.

While the lack of a major new combat system is disappointing, Guacamelee 2 is still a solid experience. There are many new enemies which all have exciting new attack systems that players will have to get used to, a greater variety in combat locations which adds to the experience. 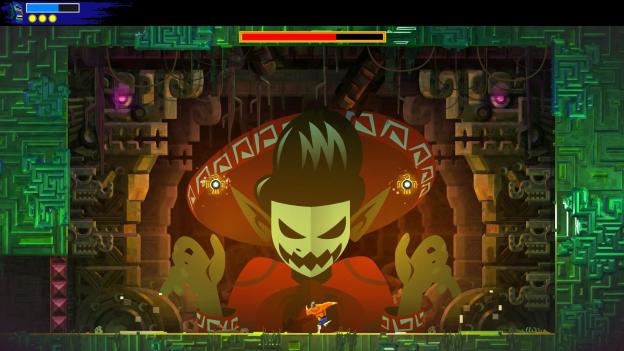 The bosses are another strong part of Guacamelee 2, each having a unique and different challenge and style, and each boss also has a small amount of character development long before the player approaches their fight.

Finally, the “puzzle” sections with quotations on them are solid. Quotations are there because the puzzle is mostly a skill test to see if the player can execute a series of moves to get to the other side of each map and players usually will earn a major reward, whether it’s 1/3 of a heart or stamina meter. These sections are often challenging but only a few are so difficult you’ll spend more than a couple minutes on it, but each of these skill tests feels great when the player finally completes the room and gets the reward.

One last comment on the gameplay is there’s a section of the game, the trials, which were well done in the original game, isn’t a part of Guacamelee 2. Instead, the player reaches this point in the game and the game asks for more money to unlock this section of the map. At first this appears to be a joke, or a clever statement on the state of games now, but instead clicking on “Yes” takes the player to the Steam store, or whatever platform the player is on.

Guacamelee has a great value proposition but I still dislike seeing parts of the game actively locked off and begging the player for more money. Even if this section was done after the primary development of the game was finished, it feels awkward. Though it doesn’t affect the score, in this case, it’s still a weak moment for the game.

Overall, Guacamelee 2 is what fans of the original game should have expected from the sequel. It’s a fun, entertaining, and well-developed game, focusing on what made the original game great and adding to the formula.

If there is a problem here it’s that Guacamelee 2 takes a short step forward when a couple of steps would have been better. The story is far better, but the graphics and gameplay feel too similar to the original game to differentiate this game from the original game.

Going back and playing the original game makes it clear that Guacamelee 2 is more fluid, has better writing and is the better game, but it doesn’t stand out over that first game. It’s the same Metroidvania style we’ve seen in the original game, but this time it’s just a direct sequel that will please fans but limits the audience of this game to only those who enjoyed the first game.

There’s nothing wrong about Guacamelee 2, most of the problems with the game are minor and won’t bother fans of the series. However, there’s nothing that will make people who disliked the first game take another look. It feels more like Doom 2, where they took the original game and made more levels with slight improvements, rather than reinvent the wheel.

While there’s nothing wrong with that, it is what a 4/5 is. A solid game for fans of the genre, or franchise, and in this case, Guacamelee deserves a lot of credit just for achieving a second game that is as fun to play as the original.

That’s Guacamelee 2, and for those of you who haven’t played the original, you probably could just start with this game. If you like this review, consider subscribing, hit a like or dislike, if you are hearing this you already saw the whole review so you probably have an opinion, and leave a comment if there’s anything I left out or what you think of Guacamelee or Metroidvanias.

I’m going to pop up two other great Metroidvania, both from Kickstarter, we have the amazing, Bloodstained: Ritual of the Night, or the extremely well done Timespinner. Check out those videos if you want more.

Until next time I’m Kinglink and thank you for watching.